Is Melatonin an Effective Cancer Treatment? 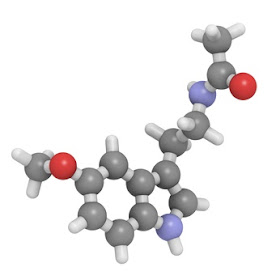 Melatonin has been pigeonholed for far too long, as far as we’re concerned.

Often referred to as the “sleep hormone,” melatonin actually addresses MUCH more than just that. In fact, it could even hold potential as a viable cancer treatment.

In this post, we’re going to shed some light on melatonin’s overlooked (but amazing) role in protecting against cancer.

It’s about time it gets the recognition it deserves. Don’t you think?

Melatonin is a natural hormone secreted by the pineal gland. It plays a significant role in various functions of the body, including supporting your immune system.

Melatonin stimulates natural killer cells whose job is to destroy cancer and pathogens.1 It also stimulates other members of your immune system, including T-helper cells, lymphocytes, macrophages, and monocytes.1

All of these “guys” are important in keeping you cancer-free, and your immune system simply cannot function without them.

The best way to defeat cancer is through a multimodal approach. Just like fighting a battle, cancer must be attacked through different angles for victory.

Conveniently enough, melatonin has been shown to stop cancer growth through several mechanisms.

It inhibits tumor angiogenesis (the growth of tumor blood vessels),2 and tumor growth,2 and it induces apoptosis,3 a process in which cancer cells commit “suicide.”

How’s that for a so-called “sleep hormone”?

Melatonin Extends the Lives of Cancer Patients by 45%

It also improved the rate of complete or partial remission by nearly 50%.4 The experts say more research is needed, but we think this is definitely worth mentioning.

Here’s a table which shows the effect of melatonin on cancer mortality. It’s based on the work of Lissoni, an Italian researcher. This is rather impressive: 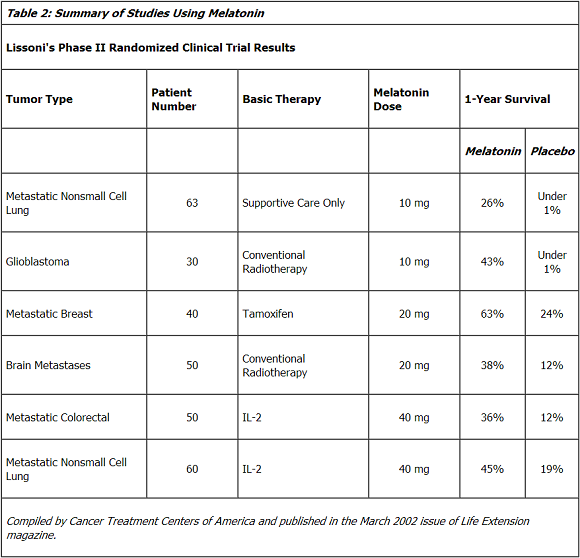 Melatonin Alleviates the Side Effects of Chemo and Radiation

Chemotherapy and radiation often come with a host of side effects. Chemotherapy, especially, is one of the toughest medical therapies to endure, causing many patients to end treatment prematurely.

Studies show that melatonin may help to enhance the effectiveness of chemotherapy. Additionally, it has been shown to alleviate the following side effects associated with radiation and chemotherapy:

Note: If you’re serious about taking melatonin along with your cancer therapy, please discuss it first with your health care provider. It may not be right for everybody.

The research on melatonin is truly remarkable. And with time, we think many more studies will reveal and support the anti-cancer benefits we've outlined above.

Have you or has anyone you know used complementary therapies to help battle cancer? If so, did they help? Please let us know about it in the comments!